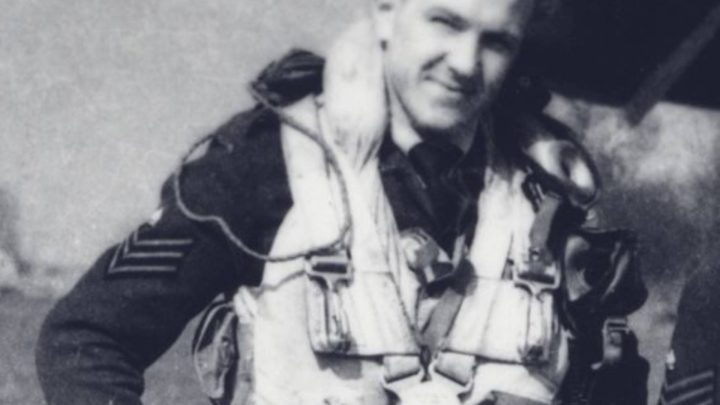 The grave of Rear Gunner Paul Wojciechowicz who remained in Northern Ireland following the Second World War is located at Kircubbin Cemetery, Co. Down.

Rear Gunner Paul Wojciechowicz aka Paul Henderson who passed away on the 23rd November 2010.

Paweł Wojciechowicz came to Northern Ireland through perhaps the most dramatic and difficult of journeys. When Paweł was young, his parents were murdered by the Soviets during the Polish-Soviet War in the aftermath of the Great War. Their land and all their possessions were taken by the Soviets and he went to live with his uncle.

Paweł later joined the Polish Military Youth and had a keen sense of patriotism. His town, being six miles from the border with Russia, was one of the first to be bombed and occupied by the Soviets in the Second World War. Paweł was fortunate to be able to escape the invading forces, attempting to at first unsuccessfully flee to Lithuania, later gaining entrance to Latvia, along with other Poles fleeing conflict.

Latvian hospitality unfortunately would be short-lived, as the Red Army invaded the country, capturing Paweł and thousands of others and sending them to Gulag labour camps in Siberia.

Upon release under ‘Operation Barbarossa’, Paweł made his way from Siberia to British Persia (modern day Iran), making contact with Allied forces. He then made his way to South Africa, joining the Polish Forces in exile, and eventually making his way to Blackpool, England. He joined the RAF in 1944, becoming a Rear Gunner for Polish 300 Bombing Squadron and, later, 315 Squadron, stationed in Ballyhalbert. Despite the fact that many Poles were not allowed to remain in the UK after the Second World War, Paweł was able to stay. In absence of a brief stint working in Liverpool post-WWII, Paweł married and settled in Northern Ireland until his death in 2010.